The Waddington Medal is the only national award in Developmental Biology. It honours outstanding research performance as well as services to the subject community. The medal is awarded annually at the BSDB Spring Meeting, where the recipient presents the Waddington Medal Lecture. Here we introduce the 2019 winner Kate Storey who won the 2019 Waddington medal for her outstanding work in understanding the fundamental processes that control neural differentiation in vertebrate development. 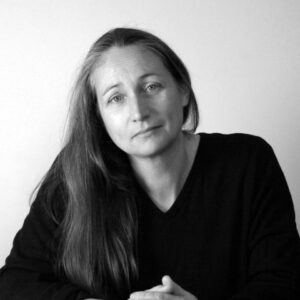 Kate was first introduced to the core questions of developmental biology at the University of Sussex. She then started her research career as a graduate student in Cambridge where she already showed originality of thought and direction with an independent project on the neural development of the earthworm. This interest in understanding how a simple nervous system forms was pursued further supported with a Harkness fellowship in Berkeley, California, where she investigated leech development. On returning to UK, Kate switched to studying the development of the vertebrate nervous system where, over the years, she has made a string of exciting and important discoveries. This work has gained her international recognition in the field of developmental neurobiology and it is this, together with her many contributions to the developmental biology community, that has led to her being awarded the 2019 Waddington medal from the BSDB. 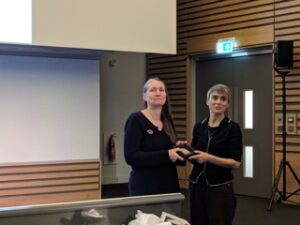 Kate Storey is now the head of the Division of Cell & Developmental Biology and Chair of Neural Development, in the School of Life Sciences, at the University of Dundee in Scotland. She investigates cellular and molecular mechanisms regulating neural differentiation in chick and mouse embryos as well as in mouse and human embryonic stem cells. By combining the advantages of each of these experimental systems, Kate has been able to gain substantial insights into the fundamental and conserved processes that regulate vertebrate neurogenesis. Her work has pioneered innovative live imaging approaches for monitoring behaviour and signalling of individual cells within developing tissues. These approaches have led to discovery of a new form of cell sub-division, named apical abscission, as well as providing insights into cell signalling dynamics that underpin asymmetric cell division. Not only is this work an excellent example of what can be learnt from observing cell biology within its normal context in vivo, it also pointed to new mechanism by which signalling is regulated during differentiation. Understanding how the dynamics of neuronal specification and differentiation is controlled during early development is a continued theme in Kate’s work.

Her earlier work showed that an interplay between FGF, Wnt and Retinoic Acid signalling is a fundamental signalling switch regulating the onset of neural differentiation. More recent findings have now linked a component of this, FGF/ERK signalling, to molecular machinery directing chromatin accessibility at neural genes. A further essential aspect of this discovery is in the provision of a mechanism by which the timing of neural differentiation can be coordinated with the progressive generation of somites within the paraxial mesoderm. Such work emphasises the ways in which developmental biologists can learn from studying processes from the sub-cellular level, through to the tissue and whole embryo level. Her discoveries have led to a programme of work that highlights the very best of developmental biology and continues to be an inspiration for young researchers entering the field.

Kate is seen as a leader in the field and has been prominent in promoting developmental biology in the UK and beyond. In Scotland, as Head of the Cell and Developmental Division of the University of Dundee since 2010, she has supported developmental biologists at different times in their careers. She has co-organized many scientific meetings including the first chick community wide meeting in 2007, the 2006 BSDB Autumn meeting on signal transduction mechanisms in development and, significantly, an EMBO workshop on spinal cord development that brought the field together for the first time in Sitges (Spain) in 2014. She has organised the Joint meeting of British, Spanish and Portuguese Societies for Developmental Biology 2015; and this year she co-chaired the Academy of Medical Sciences first international meeting on Neural Development in Oxford. Kate has in addition played an important role in the development of the field over the past ten years as a director of The Company of Biologists in particular by initiating and overseeing a series of interdisciplinary workshops on cell and developmental biology.

Kate was elected to the Royal Society of Edinburgh in 2012 and awarded the MRC Suffrage Science Heirloom Award 2014. She was elected to EMBO membership in 2016 and to the Academy of Medical Sciences 2017. In addition to her scientific achievements, Kate is known for her contributions to promoting science to a wider audience world-wide through a unique collaborative project with her sister Helen, a fashion designer. In this project, key developmental processes served as inspiration for designing textiles and dresses to chronicle the emerging human embryo. The resulting exhibition “Primitive Streak” has been seen by over 3 million people. The exhibition was one of eight major achievements identified in The Wellcome Trust’s celebration of its first 75 years, being one of the best examples of The Trust’s contribution to science communication.

This paper uncovers novel cytoskeletal architecture that characterises apical neuroepithelial cells. The study demonstrates how this is generated and shows that it is required for neuronal delamination.

This work identifies a new form of cell sub-division, apical abscission, which takes place as neurons are born and detach from the ventricular surface. This is mediated by downregulation of N-cadherin and actino-myosin contraction and involves loss of apical membrane and regulated dismantling of the primary cilium. Apical abscission may represent a new mechanism for regulating cell signaling during differentiation: loss of ciliary membrane possessing the hallmarks of active Shh signaling suggests that apical abscission curtails signaling through this pathway.

This paper shows that FGF signalling promotes chromatin compaction at neural genes in the mouse embryo and that this regulation of chromatin accessibility can be uncoupled from mechanisms that direct transcription.

This paper provides a mechanism for cessation of body axis elongation in the chick. It reveals a sudden and discrete loss of FGF-dependent mesoderm identity gene brachyury in the late tailbud and shows that this is due to breakdown of oppositional signalling between FGF and retinoid pathways.

Characterizes the stem zone (now known as the Caudal Lateral Epiblast, CLE) of the chick embryo and shows that cells here express both neural and mesodermal genes. The work demonstrates the requirement (but not sufficiency) for FGF signalling for the induction and maintenance of stem zone (CLE) and the differential regulation of Hox genes in the elongating body axis.

Acknowledgements: B.Steventon would like to thank Kate Storey for her contributions to this text, and Alfonso Martinez Arias and Cheryll Tickle for helpful information and thoughts taken from their nomination text.