You are here: Home › Awards › The Wolpert Medal 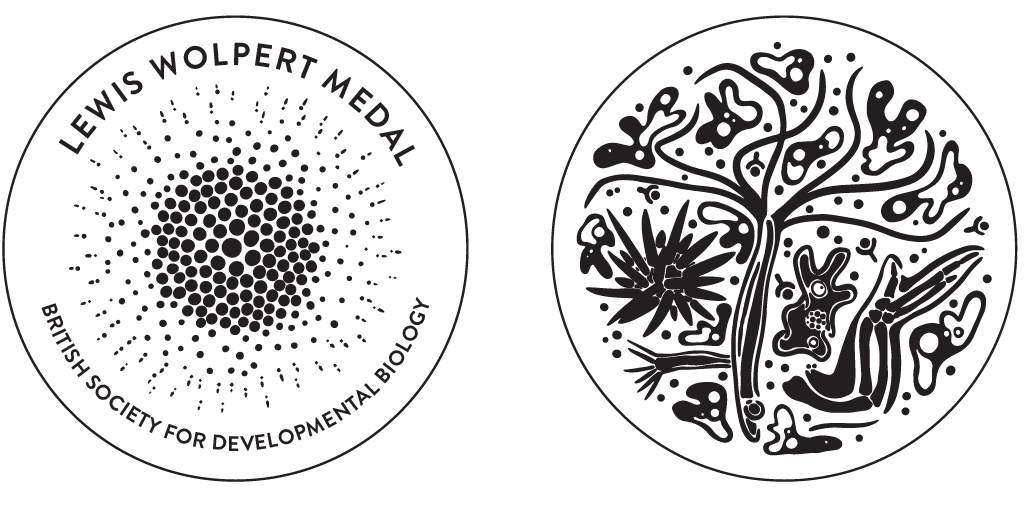 Following this year’s sad passing of one of the greats of Developmental Biology, Lewis Wolpert, the BSDB committee has decided to launch a new annual medal in his honour. Lewis was well known for his ability to distill our subject’s most engaging and fundamental problems into concise and well-grounded core concepts of Biology. This led to vastly important contributions to research in our field, but also to the communication of its problems to a broader audience. Through teaching, popular science writing and acting as a spokesperson for Science as a whole, Lewis inspired many of us into the deeper study of Developmental Biology. Therefore, annual ‘Wolpert medal’ will be presented to an individual who has made extraordinary contributions to the teaching and communication of Developmental Biology.

We have been incredibly fortunate to have the Scientist and Artist, Steph Nowotarski design the Lewis medal. In designing the Wolpert medal, we wanted to include various different model organisms that Lewis worked with through his career, including Hydra, chick limbs and sea urchins. At the centre is an image of Hydra as they represent the concepts of continual regeneration and renewal, and it is our best teachers and communicators that bring about the constant regeneration and renewal of our field.

To learn more of Lewis’ life and work, please read this Obituary by Jim Smith. Read more of Lewis’ impact on the BSDB here. Please also engage in an upcoming lecture series in his memory, hosted by UCL.

You’ll all be aware that one of the great thinkers and inspirers (and frankly, heroes) in our field of Developmental Biology, Lewis Wolpert, sadly passed away earlier this year.  For several years our BSDB committee has been considering an award that might honour important aspects for our community beyond simply bench lab achievements, in particular teaching and communication. What better than to initiate such an award this year and name it after Lewis who was himself such a fantastic communicator of Developmental Biology ideas.  As the inaugural recipient of this medal our committee unanimously agreed that Jamie Davies from Edinburgh exemplifies all that we would like to reward with this new medal.  All of us on the committee have experienced interviewing undergrads from Edinburgh (perhaps applying for PhD studentships), who raved about Jamie’s inspirational lectures.  He has also written several very popular books in and around our field.  And, he even has Lewis lineage history – he did his post-doc with David Garrod who had worked in Lewis’ lab in the early pre-chick limb days on Dictyostelium motility.

Nominations for the Wolpert Medal