You are here: Home › Awards › The Beddington Medal

The Beddington Medal is the Society’s major commendation to promising young biologists, awarded for the best PhD thesis in Developmental Biology defended in the year previous to the award. It was announced in 2002 [letter #23/2] and first awarded in 2004 (see below).

Rosa Beddington was one of the greatest talents and inspirational leaders in the field of developmental biology [letter #43, p.13]. Rosa made an enormous contribution to the field in general and to the BSDB in particular, so it seemed entirely appropriate that the Society should establish a lasting memorial to her. 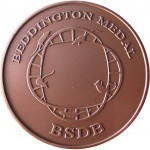 Prizes are an effective and important way of recognising outstanding scientific achievement at any stage of an individual’s career. The BSDB Poster Prize – awarded each year at the Spring Meeting – has rightly become highly coveted, as much for the honour that it confers on the winner as for the free trip to the US developmental biology meeting that she or he receives. Nevertheless, in 2003 the committee felt that a new award – recognising outstanding achievement by a PhD student throughout the course of his/her research project – would be a fitting way of remembering Rosa each year. The design of the medal, mice on a stylised DNA helix, is from artwork by Rosa herself.

Nominations for the Beddington Medal

The eligibility period covers PhD dissertations which were defended during the calendar year previous to the award. Furthermore, applicants need to have at least one paper accepted or close to acceptance. The deadline for nominations will be announced after the autumn meeting and usually is around mid Janary. Nominations should be in two parts:

Candidates can be of any nationality, must be BSDB members at the time of nomination, and at least one of their supervisors must be UK-based. Nominees must be able to attend the BSDB Spring Meeting, where the winner is to present a plenary talk.

All nominations received will be considered and voted upon by the Committee and the winner invited to present the Beddington Medal lecture on their thesis work at the following BSDB Spring Meeting.

Nominations should be sent to the BSDB Secretary (secretary@bsdb.org).