You are here: Home › News › Autumn meeting report: Nora and Nestor catch you up with the 2018 meeting on Embryonic Extraembryonic interactions
By comms on October 26, 2018 in News

Hello there! This is Nora Braak and Nestor Saiz, we are based in Oxford and New York respectively and we study butterfly and mouse development. Last week we went to the BSDB Autumn meeting, which also happened to be the third workshop on Embryonic Extraembryonic Interactions. We enjoyed it so much that we wanted to share our thoughts with you [disclaimer: these thoughts don’t represent those of the BSDB, the organizers, nor, of course, our PIs’…]

– Hey Nora, do you know how many developmental biologists does it take to take over an Oxford University College…?

– Well, about a hundred apparently! Which is as many of us descended onto Corpus Christi College last week to chat about the most extra of all tissues: extraembryonic membranes…

– Fine, fine… if you’re going to get all serious about it, do you want to tell us about some of the talks that you liked? It was a very exclusive meeting, I bet most readers did not get to go.

– It was a great meeting; it will be hard to pick highlights but it must be done. To start, it was the first extra-embryonic meeting where team Insect was properly represented and it was such a success we are thinking of getting t-shirts made for the next time #teamInsect. The meeting started off strong with a plenary talk from Liz Robertson. She gave us all a crash-course in early mouse development and all the essential genes in cell-lineage specification and TGFβ signaling. Their paper, still hot off the press shows how loss of both Smad2 and 3 alter the epigenetic landscape and activate extraembryonic gene expression in embryo-derived stem cells.

– After Liz’s keynote, I think Kristen Panfilio made it very clear to all of us mouse aficionados that #teamInsect was in the house. Turns out insects do have extraembryonic membranes, unlike what you might have heard from a certain famous fruit fly… She also showed some absolutely gorgeous movies of Tribolium‘s amnion and serosa breaking and retracting into the yolk to let the embryo develop further. You can see them and read more about their reporter and how the EE get themselves out of the beetle’s way in their paper.

– The rest of the Monday afternoon discussed how development meets bioinformatics; from Laura Banaszynski telling us about the function of the H3.3 histone variant to Sarah Teichmann, who wants to develop the ‘Google Maps Street View’ of the human body. The first day ended with a lovely drinks reception and a three-course sit down dinner in the beautiful hall of Corpus Christi, which made me wish I had dressed up a little. The dinner was followed for many by some more drinks in the Bear Inn, one of the oldest pubs in Oxford.

– Ah, the Bear Inn and its low ceilings… Shout out to Miguel Manzanares too (#teamMammal) talking about genome structure in the early mouse embryo and Federica Bertocchini, who is studying chameleon development, which is awesome because… chameleons?? Come on… Did you know chameleons take 200 days from laying to hatching? Did I say chameleon yet?

– Tuesday was mouse day (#mousetastic). In the morning Ayaka Yanagida and I got the honor to present after two of my favorite embryologists, Jenny Nichols and Claire Chazaud! Jenny discussed their latest look at the Pou5f1 (aka Oct4) mutant, which is very close to her heart, then Claire doubled down on the mutants showing what happens when you knock out both Nanog and Gata6 in early mouse embryos. All of my favorite transcription factors!

– Yes it was a great morning, but after this early embryo overdose I was glad to switch to the lightning round of 3 minute presentations from all 24 poster presenters. They really piqued everyone’s interest, the poster sessions were so well attended – and not only because of the pastries and beer provided!

– I agree, it is the first time I see this pitching of the posters at a conference and I thought it was a very neat idea – though it probably only works in small settings like this workshop. Brief presentations are hard, kudos to the organizers for giving everyone a chance to practice!

– In the afternoon we had great talks from Takashi Hiragii and Veronique Azuara. I personally really enjoyed Matthew Stower’s talk, who used light sheet microscopy to study visceral endoderm migration, the pictures and the data analysis were amazing! Again the day ended in a 3 course sit down dinner in the beautiful hall of Corpus Christi, this time I was more prepared and knew which bread roll belonged to me and which fork to use for which course.

– I still don’t know how Matthew managed to take some of us on a pub crawl after lunch and then go and deliver his talk. Matthew you’re a total star.

– What did you think about Wednesday? It was an intense day.

– Yeah, Wednesday was packed. It started with all non-mouse mammal models. Berenika Plusa and Ania Piliszek presented their work on preimplantation rabbit development, whereas Stephen Frankenberg and James Turner engaged in their own marsupial cutey contest – for all of you dunnarts, possums and opossums out there: if you are interested in being the next top model organism, being cute will take you far! Jokes aside, theirs were some of my favorite talks. They had really nice data and ideas on the evolution of extraembryonic tissues and X-Chromosome inactivation in mammals that made me consider if I should switch model organisms.

– I also really liked the talks about the placenta by Rosalind John and Myriam Hemberger. Their talks about the importance of the placenta in embryonic development and the influence it can have on the maternal behaviour were both thought provoking and well presented – here’s one of their papers.

The day ended with talks from Diana Laird, on the transgenerational defects of environmental damage, and from Elizabeth Duncan. She looks at bee and aphid reproductive control as a way to understand how animals respond to their environment. Did you know that aphids will change their mode of reproduction and development depending on the season?? Yet the embryos ultimately look the same!

– Elizabeth Duncan’s talk was so interesting! I think even Queen B would have agreed… (#RoyalJelly)

– Right… oh, in the evening we were welcomed in the Natural History Museum of Oxford, with bottomless gin and delicious bowl and finger food. The beautiful surroundings gave everyone a chance to mingle, share their enthusiasm about dinosaurs and admire a live bee colony which were even more of interest after Elizabeth Duncan’s great talk

– Finally Thursday came around. It started with two great talks by #teamInsect, from both Maurijn van der Zee and yourself, Nora. You both seem to enjoy poking insects with infected needles… I guess it’s an effective way to trigger immune responses by the serosa – one of the many critical roles of the extraembryonic tissues in insects, as we had learned from Siegfried Roth’s talk on the evolution of Toll signaling! I personally loved Di Hu’s talk, from Shankar Srinivas’ lab, she had done some beautiful imaging of the early post-implantation mouse embryo and delivered like a pro. We also saw Zofia Madeja, Vasso Episkopou and Jaime Rivera, who is doing “dunkin’ transgenics!”. Delivering Cas9 to do CRISPR into mouse zygotes by bathing them in media with virus is definitely a slam dunk.

– Yes. The day was finished by two phenomenal speakers, Mariya Dobreva, who won the Dennis Summerball Award and presented her work on the role of Smad5 in the amniotic ectoderm, and Ali Brivanlou who wrapped up the meeting with some absolute eye candy on their work in in vitro models of human development.

– After that, awards were given to the three best poster presenters, Peter Baillie-Johnson, Matthias Teuscher and Berna Sozen. Well done them!

Extremely honoured and appreciative for receiving the poster 2nd prize from BSDB Embryonic-Extraembryonic conference. My lovely prize is my favourite book, Origin of Species✨
A huge thank you to all organisers for such brilliant 4 days! Looking forward to next one! #bsdb2018EEI pic.twitter.com/qPNkoSma4s

All in all, a wonderful little meeting – science, weather and setting all came together to make for a truly great week. Thanks so much to the organizers, Susana Chuva de Sousa Lopes, Kat Hadjantonakis, Kristen Panfilio, Tristan Rodriguez and Shankar Srinivas for putting it together and we’re looking forward to 2022!! 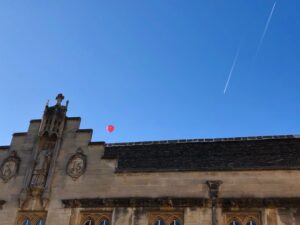 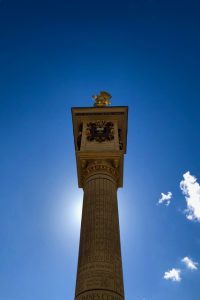